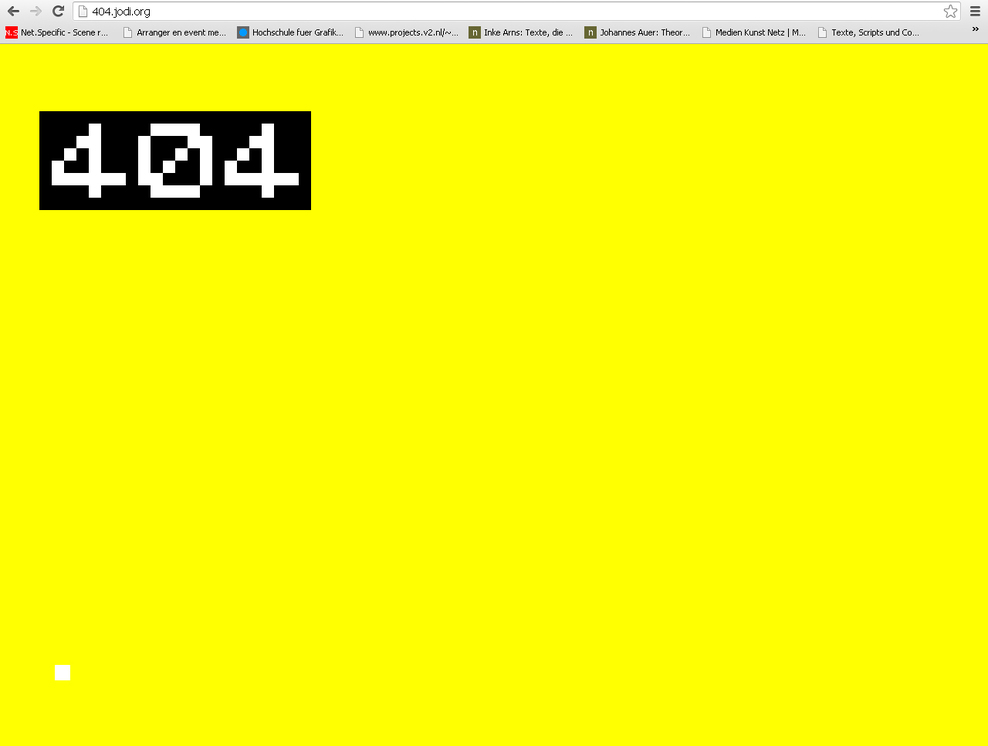 What is net art?

Net art is an elusive and sometimes anarchic art form which uses the Internet as its primary material. Net art works often draw on data from other Internet materials and websites, which helps give them their distinctive dynamics and transience.

In other words net art is a site-specific art form bound to its own presence and impact on the Internet. It is therefore necessary to create an online space such as this, where the art can be exhibited and experienced.

Net art terminology can be difficult to define, especially when successive net artists have over time moved outside their ‘web domain’. Similarly, the term net.art, with its distinctive central dot, has become a historical term for early net art, which can be dated to having run roughly from 1993/94 to the early 00s. Today, artists working with the Internet do so in an enlarged practice, with mobile devices offering new opportunities in the network. So do artists who link physical space with the online space, although this has previously been used in earlier net art.

It can be difficult to completely define the boundaries of the field of net art. At the very least we can say that it must be dependent on the Internet in order to fit this categori-sation. However, many would also maintain that it must exist within a browser in order to qualify as net art, but this is again dependent on whether it is the World Wide Web we are dealing with here or are we concerned with a more generalised conception of the network.

Many early net artists addressed the utopia that was linked to the Internet in those early years. In particular many of the Internet’s new users idealised the unlimited access to data and the free flow and distribution that the Internet would make possible. This ideal state never became an actual reality, however, as search engines and browsers quickly began to pursue their own economic agendas, which many net artists question and display in their work. For example, the American net artist Mark Napier’s work, The Shredder (1998), which literally shreds and deconstructs the websites that are keyed into the search field.

Early net art often used the Internet’s coded existence as a central thematic in the works; something it continues to do. We can recognise a clear code aesthetic, where the use of faults, or so-called ‘glitches’, act as a methodical conceit in net art. The Belgian / Dutch net art group JODI, who are also a part of Net.Specific’s first exhibition Communication Paths, are known for being the first to consistently use the glitch in their works. By making the underlying code the central focus, JODI is effectively turning the Internet in-side out. The works are often rather chaotic and abstract layers of code which challenge the user’s visuality and navigation patterns on the web.
Read more about JODI’s work in the Net.Specific exhibition

The hyperlink, a core net characteristic, has similarly been used by artists as a narrative, storytelling instrument. For example, the Russian Olia Lialina’s works, which create structures that, amongst others, tell of a hypertextual journey around the net in the work Agatha Appears (1997 / reconstructed 2008), or form a visual poem in My Boyfriend Came Back from the War (1996), where the user clicks around between the sites of the work.

The critical and conceptual Internet practice

While most net artists have a general consciousness of the Internet’s functionalities, there are also some direct activist net art groups who pay particular attention to the Internet’s commercial interests. The group etoy have, amongst other things, worked with users’ own critical awareness with their digital hijacks (1996): When the user searched for specific words, they were literally kidnapped and sent to a website by the name hijack.org. The site took over the search and a digital hijack takes place.
The group has also been involved in extensive litigation with the commercial company eToys Inc. for the rights to the name and web address etoy.com. The trial included a mobilization of the entire network in a TOYWAR (1999), which ended with the net art group etoys winning. The victory has become a powerful symbol for how the balance of power in the digital culture can be tilted.

The same concerns can be seen with the group ®TMark. In 1999 they created two fake websites, GWBush.com and Gatt.org, which focused on key issues in George W. Bush’s politics and the World Trade Organization’s programs, respectively. The WTO website Gatt.org was viewed by many being the official site and gained the group an invitation to attend a congress in 2000 as the WTO – and thus the activist group The Yes Men were born. Gatt.org is a good example of an intervention that began online and subsequently moved out into the physical space as political action. These types of fake website are also a consequence of the anonymity that one can easily achieve on the Internet, where a convincing fake page can be created by anyone with the programming skills. On the Internet it is possible to perform and create one’s own identity, engage in subversive activities and cultivate what the media and net activists in Critical Art Ensemble call ‘digital civil disobedience’.

A more conceptual critical practice can be seen with artists such as the Serbian Vuc Cosic and the English artist Heath Bunting. Bunting has a critical approach to the institution and society. He is interested in seeing the world through the network and various systems. He creates works that explore and question things such as economic interests; for example, in the work Skint: The Internet Beggar (1996) and the complex identity project The Status Project (2004-2014). Much in the same spirit Cosic has criticized the medium of the exhibition. For example, in Documenta X’s exhibition of net art with the work Documenta Done (1997), which was a direct copy of the Documenta website before it was taken off the Internet.

Similarly the Dutch net artist Constant Dullaart plays on the theme of commercial trends on the Internet. He is interested in such things as re-contextualising materials that he finds online and displaying new sides to them. Dullaart, for example, created a rotating, a sleeping and a tilting Google browser and made performances, both live and via YouTube, where he, amongst other things, re-enacts a DVD screensaver, using himself as performer.

That the network is a system which provides material to net art is essential. Hacking, cloning, copying and appropriation can all be employed to create digital collages where questions about rights and authenticity really become issues. Many net artists have a democratic approach to the Internet’s materials and are committed to sharing and ‘copy-left’, which alludes to the absurdity of copyright on the Internet.

The Italian net art group, 0100101110101101.ORG, have consistently borrowed from digital and popular culture throughout their practice and taken the consequences of also sharing their own personal material in the work Life Sharing (2001-03). They have copied and hacked other websites, including the net art group JODI’s work, in Copies (1998), and the exhibition site Hell.com (1999), in a protest against members only access. The net artists recycling, cloning and further processing of others’ material can be likened to the open-source movement’s ideas on availability, which many net artists associate themselves with. A line of thought that is a direct consequence of the network’s coded materiality.

The Internet – a performative space

The Internet is itself performative, through its changeability and dynamics. To a large extent net art reflects this performativity, and so-called online interventions and per-formances have emerged right from the start. A well known example is the aforemen-tioned WTO intervention of ®TMark. Many net artists also see themselves as per-formance-artists who set events into action via the Internet’s own mechanisms and performativity. Net art works can in this sense be self-organizing viral organisms, distributed over a network, for example 0100101110101101.ORG’s Biennale.py (2001). The work is a python virus that redistributes itself and takes on a life of its own on the network. For Net.Specific’s exhibition Communication Paths, 0100101110101101.ORG have also created a viral work, a happening, where rumour-mongering and the distribution of an online video are in focus. Read more about 0100101110101101.ORG and the work Emily’s Video

Making live performances on the Internet has become more prevalent with Web 2.0 and social media, where synthetic worlds, online games and chat rooms have become the stage upon which artists can unfold their works. 0100101110101101.ORG have specialised in this and from 2003 and onwards they have made re-enactments of famous historical performance works in the synthetic world of Second Life. Similarly, they have constructed a mock suicide via a chat room in the work No Fun (2010).

The use of physical space

That net art can be linked to physical space is nothing new. Right from the start it was important for artists to meet physically. Some elected to create works that activated both physical and digital online space in a process where one supported the other. An early example of a work associated with a physical space where the Internet played a significant role is Antonio Muntada’s The File Room (1994), where users could both search for and archive their own material about censorship. Today, some net artists have a similar focus on the shift that can exist between an online presence and a place located in the physical landscape, such as the Canadian artist Michelle Teran, who creates stories through the use of data and online maps such as Google Maps. Read more about Michelle Teran and the work The Little Yellow House as well as Jens Wunderling and Philipp Bosch’s work Transgression, both of which introduce physical space into Net.Specific’s exhibition Communication Paths.